Skip to content
Central Garden & Pet (NASDAQ: CENTA – Get Rating) updated its fiscal year 2023 earnings guidance on Tuesday. The company provided EPS guidance of $2.60 to $2.80 for the period, compared to EPS estimates of $2.93. The company issued revenue guidance – .

In other Central Garden & Pet news, insider John D. Walker III sold 5,000 shares of the stock in a transaction that occurred Thursday, August 25th. The shares were sold at an average price of $40.56, for a transaction total of $202,800. After the deal, the insider now owns 88,116 shares in the company, valued at approximately $3,573,984.96. The sale was disclosed in a document filed with the Securities and Exchange Commission, which can be accessed through the Saudi Electricity Company’s website. Company insiders own 20.28% of the company’s shares. 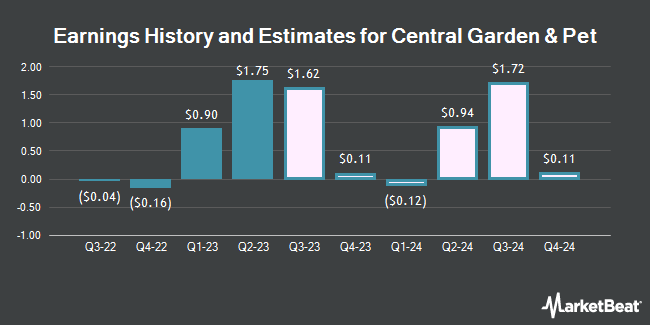 This instant news alert was created by MarketBeat’s narrative science and financial data technology to provide readers with the fastest, most accurate reporting possible. This story was reviewed by the MarketBeat editorial team prior to publication. Please send any questions or comments about this story to [email protected]

Before you consider Central Garden & Pet, you’ll want to hear this.

MarketBeat tracks Wall Street’s top-rated and top-performing research analysts and the stocks they recommend to their clients on a daily basis. MarketBeat identified the five stocks that top analysts are quietly whispering to their clients to buy now before the broader market catches on…and Central Garden & Pet wasn’t even on the list.

While Central Garden & Pet currently has a “moderate buy” rating among analysts, the higher-rated analysts think these five stocks are a better buy.