Skip to content
CINCINNATI — Downtown Cincinnati’s transformation into a festive winter wonderland continues this weekend with Light Up the Square Friday night.

What you need to know

The annual celebration marks the official lighting of the huge holiday tree in Fountain Square. The festivities begin at 6pm with live music by the Second Wind Band and a special appearance by Santa Claus.
An overview of an earlier tree lighting ceremony in Fountain Square. (Photo courtesy of 3CDC)

Plans call for the tree to be lit around 7:25 p.m. The night will conclude with a booming fireworks display by Rozzi over the top of the downtown buildings.

“Fountain Square is a special place any day of the year, but during the holiday season there is a heightened sense of joy and cheer,” Kristi Samad, senior vice president of events management at 3CDC, said in a statement.

This year’s tree is a 45-foot spruce from Worcester, Ohio, about three hours northeast of its current location along Fifth Street in Cincinnati’s central business district.

“It’s an absolute honor to be a part of this,” said Jordan Graff, a Cincinnati native and creator of the 3D Moravian Star. Luminous, Christmas or Epiphany decoration is popular in Germany.

Graff said his design inspiration came from the cardinal directions as they appear on a map’s compass — north, south, east, and west. Added highlight it from live view or profile view.

He forged the piece using contemporary blacksmithing and welding techniques in his shop in Tusculum, Columbia.

“It’s funny because I never really really set it straight until the day I installed it, so how big of a deal was that,” Graff added. He said he was so focused on finishing the work on time, that “there was no time to think about it”.

Downtown can become a bit of a wind tunnel during the winter months, Graf said, so he focused on ensuring “a random gust of wind of 35 mph won’t knock it out.”

It wasn’t until he saw the star perched atop the tree shortly after her arrival on November 5th that the magnitude of the situation began.

Graff’s design will be lit up to the public for the first time during Friday’s event. He and his wife and three children will be there to check it out in person.

“I am humbled and excited to experience this with my family,” Graf added.

Tree lighting at Fountain Square is a tradition that dates back nearly a century. The current iteration of Light up the Square has taken place every year since the Fountain Square renovation in 2007.

Over the decades, the event has become a holiday staple for locals and visitors alike, attracting thousands of visitors each year.

Graf, for one, remembers the joy of watching event planners light the tree while he was growing up on the city’s East Side. Usually he would watch it on TV with his family.

But others, like Jill Bloom of Downtown, never miss an opportunity to see her in person. 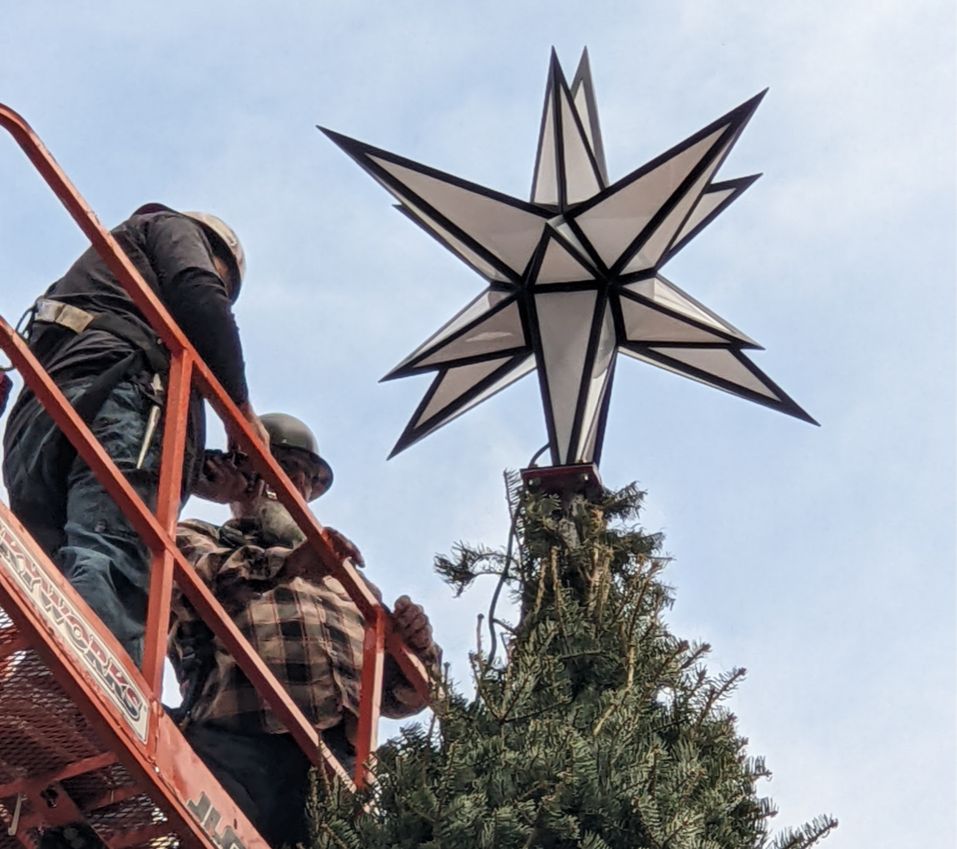 As of Wednesday, there is no snow in the forecast, but temperatures will drop into the mid-40s by the time the event begins.

For Blom, this is the perfect temperature for hot cocoa and enjoying the event with her niece and nephew. She plans to bring her dog, Curly, too.

“The lighting of the tree is the official start of the holiday season,” Bloom said. “Downtown has a different energy during the holidays.”

Reservations are still available to skate during the event at the ice rink, which can be accessed at Fountain Square website. Ski hikers will also be welcomed during Friday’s event, 3CDC said, and snowmobile bumper cars will be, too.

After Friday, there are many events that take place throughout the holiday season. These include the weekly Downtown Dazzle festivities that take place every Friday night from November 26 through December 17.

Downtown Dazzle features Santa Rappelling down the side of one of Cincinnati’s tallest buildings. There are also fireworks during each event.

Other events include a full season of Winter Wonder Lights on ice and a New Year’s Eve blast, which is described as a “yard party” from 8pm-12:30am, and the Chabad Menorah lighting celebration takes place on December 19th.

Downtown visitors can also use the ice rink seven days a week through February 20th.

In nearby Washington Park in Over the Rain, 3CDC hosts a Winter Market Saturday and Sunday through December 18, from 11 a.m. to 4 p.m. Friday.

Vendors will rotate from day to day but will sell a wide variety of local goods, ranging from clothes and art to sweets.

“As the heart of downtown Cincinnati, the plaza is a place where memories are made, and we are grateful for the privilege of programming holiday events that have become family traditions for so many,” Samad added.